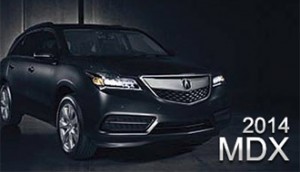 While the Acura brand is often thought of as a luxury car brand, it’s far more than that, as Digital Journal’s praise for the 2014 Acura MDX indicates, saying “a growing number of Edmonton families are foregoing their traditional minivan for large crossover SUVs such as the 2014 Acura MDX.”

We’ve seen something similar going on here at Wisconsin Acura Dealers, and we think we know why. Let’s take a look at what the MDX has to offer and why it would be a great vehicle for families.

A go-to choice for many families, this SUV comes equipped with some of the best in modern amenities, especially ones that let you stay connected behind the wheel like Bluetooth, a touchscreen infotainment system, and steering wheel-mounted controls to keep your focus where it belongs: the road.

Another particularly appealing feature of the MDX that makes it great for families is its set of safety features. High-tech amenities like these are available on Acura’s SUV:

With three rows of seating, it’s easy to switch between hauling cargo or luggage and moving the family around—and maybe a few friends too. The MDX is wonderfully versatile—a reason why we think the Digital Journal has labeled it as such a great vehicle for families.

Not only is it well-equipped, comfortable, and well-deserving of the “luxury” label, but the MDX is fuel efficient too—the 2014 Acura MDX 6-Spd AT earned an EPA-estimated 28 mpg on the highway!*

If you want tot see if the 2014 Acura MDX is the right fit for your family, the best way to do it is with a test drive. Visit a Wisconsin Acura Dealer near you and get into the driver’s seat of a new MDX today. We think you’ll agree that there are few experiences like driving Acura’s new crossover SUV.

*Based on 2014 EPA mileage ratings. Use for comparison purposes only. Your actual mileage will vary, depending on how you drive and maintain your vehicle, driving conditions, battery pack age/condition (hybrid only), and other factors.