In the 2017 NSX, a unique, complex powertrain provides a foundation for one of the smoothest, most intuitive touring experiences available to today’s drivers. The 2017 Acura NSX is a Sport Hybrid vehicle, which means that it runs on a 3.5L DOHC Twin Turbo V6 engine as well as three separate electric motors. On its own, the NSX’s V6 is capable of generating 500 hp and 406 lb-ft of torque! Engine features like variable timing control, dry sump lubrication, and drive-by-wire throttle control protect your engine and guarantee its optimal functioning. The combination of its 9-speed dual-clutch transmission and twin single-scroll turbochargers allows the NSX to rocket away from any starting gate and transition seamlessly into its higher gears. When you’re behind the wheel of the NSX, you can use its integrated dynamics system to alternate among four driving modes: Quiet, Sport, Sport+, and Track. Each setting offers a unique combination of power and responsiveness.

Still, we’ve barely scratched the surface of what the NSX can do. The first of the NSX’s electric power sources is a rear-mounted direct drive motor, which assists the transmission and the turbochargers in providing lightning-fast acceleration. In addition, the NSX comes equipped with a front-mounted twin motor unit, which allows for independent control of your left and right front wheels. A centrally located power drive unit receives both instructions and energy from an intelligent power unit, which the former subsequently transmits to each of the NSX’s electric motors. Taken together, the Acura NSX’s power sources are capable of providing up to 576 hp! 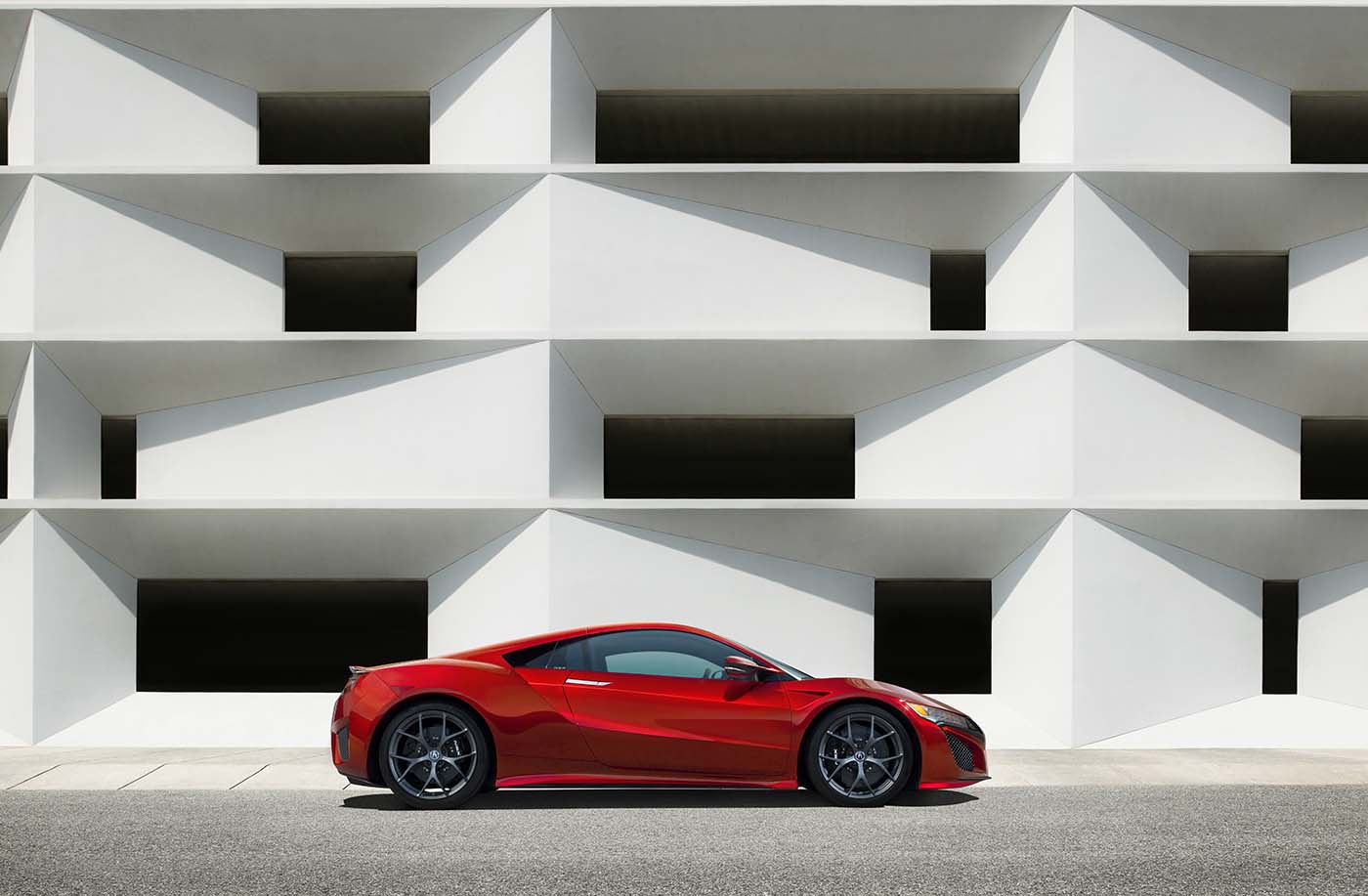 The centralized coordination of distributed electric power allows this supercar to interweave the functioning of its multiple power sources and Brembo hydraulic braking systems. The result of this process of interweaving is Sport Hybrid Super Handling All-Wheel Drive. Whether you’re on the track or on the highway, SH-AWD can direct a burst of torque to each of your front wheels independently, ensuring unparalleled precision and control when you’re attacking a sharp turn or a long curve. Hybrid regenerative braking technology nearly eliminates fade, wear, and tear on the NSX’s brakes, and that means you’ll always be able to push this remarkable car to its limits.

Superiority from the Ground Up: NSX Design and Construction 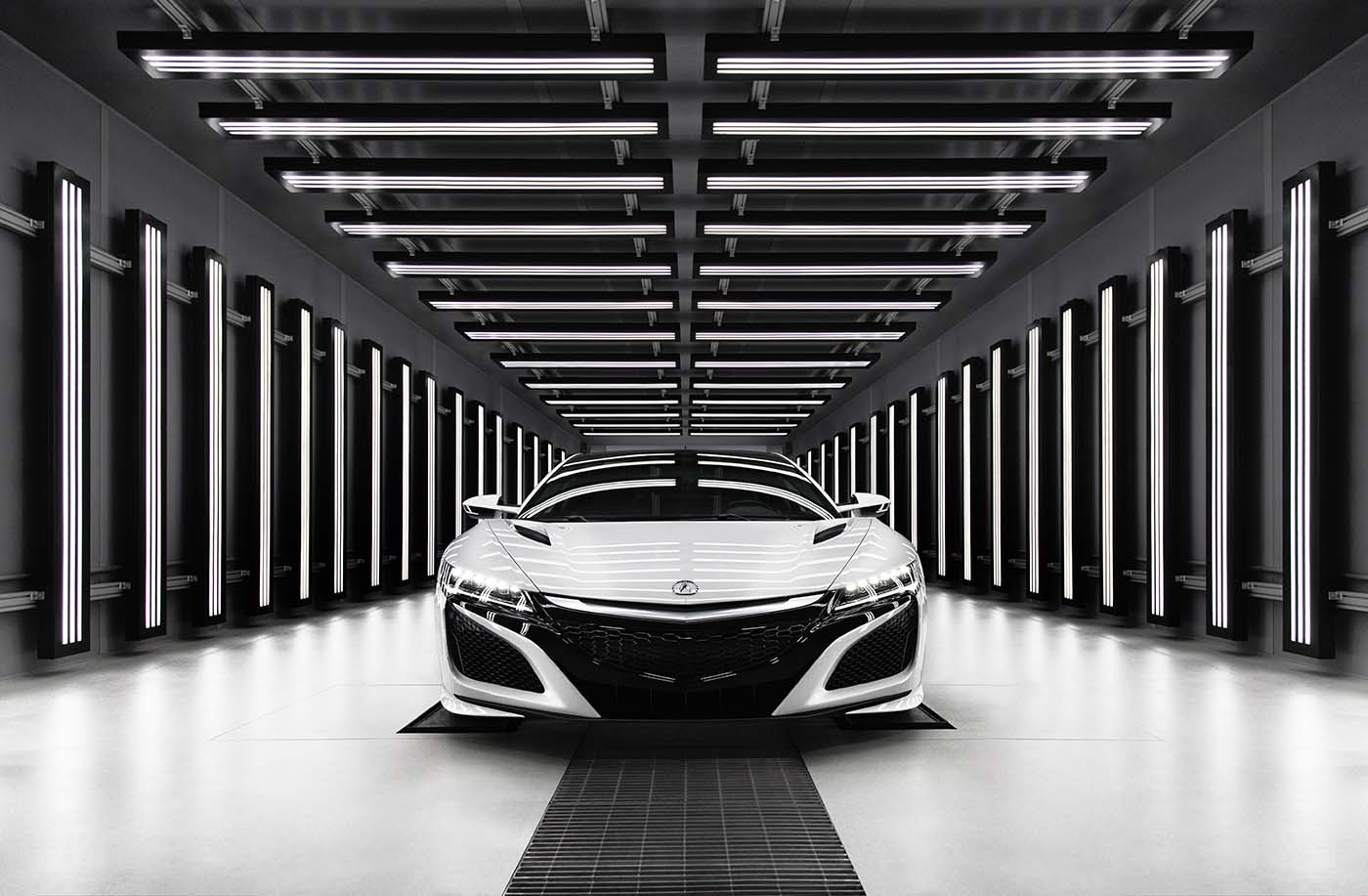 The 2017 Acura NSX’s frame and body are no less advanced than the powertrain that they shelter. Conceptual fluid dynamics and numerous wind tunnel tests have helped to produce a supercar that looks outstanding and drives like a dream! Every exterior element, including its surface panels, door handles, and even its side mirrors, has been designed to make the NSX as aerodynamic as any car on the road today. At the same time, numerous air-intake valves use your thirst for speed to cool this supercar’s motors and power sources. Those who’ve had the chance to drive the NSX quickly realize that it doesn’t need to conquer elements like airflow and weather in order to reach peak performance. Instead, it cleverly turns those uncontrollable conditions to its own advantage.

Beneath its exterior panels, a clean-sheet, multi-material body increases the responsiveness of the NSX by maximizing the rigidity of its frame. The advanced suspension in this year’s NSX is composed primarily of third-generation magnetorheological (MR) dampers, which perform their function nearly 1,000 times per second in order to minimize the shake and the noise that often accompany high-speed driving. On top of all this, the 2017 Acura NSX has been designed with the lowest center of gravity in its class! No other supercar is capable of putting you in closer contact with the road.

Take the NSX for a Test Drive!

Acura’s vehicles have always provided near-legendary performance specifications, and the construction of the 2017 Acura NSX has allowed their engineers to reach new heights. Only the NSX offers a touring experience that you’ll enjoy day after day, and year after year. Wisconsin drivers can spend some time inside this one-of-a-kind supercar by calling or visiting a Wisconsin Acura Dealer today!